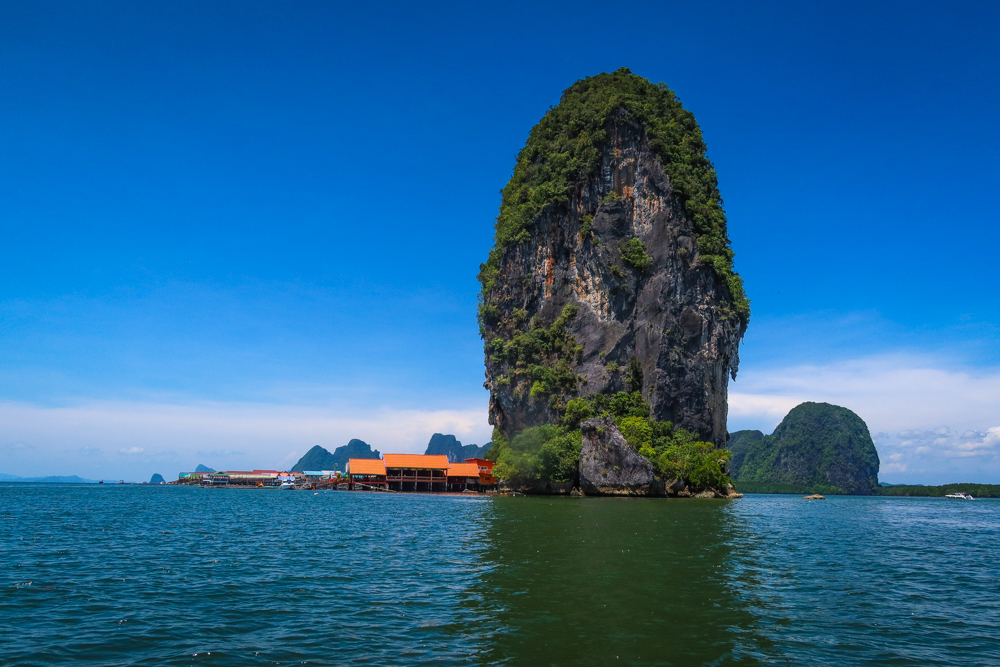 For many tourists in Thailand, the name Phang Nga is usually synonymous with Ao Phang Nga – the world-renowned bay with the towering limestone rocks, cliffs and caves, including the infamous “James Bond” island. It is one of South East Asia’s three famed karst waterscapes, along with Ha Long Bay in Vietnam and Bacuit Archipelago in Palawan, Philippines. It’s no surprise it’s on most tourists’ must-see list of Thailand’s attractions.

While majority of visitors come here on day trips from Phuket, very few of them visit Phang Nga town just 1.5 hours north of Phuket Town, the capital of the eponymous province and a not only a much better gateway to Ao Phang Nga but also a picturesque town with its own interesting and rather unique sights.  Lonely Planet calls Phang Nga “a scruffy, unremarkable town” but that’s quite unfair.  It’s true, like most Thai provincial towns, Phang Nga is quiet and somewhat sleepy, and a sizeable Muslim population means there is not too much night-time entertainment here. But the town is picturesquely lined along the narrow valley between 2 dramatic karst mountain ridges, with an occasional haystack rock in the middle, and packs a decent punch in terms of interesting sights.

You can visit the famous Ao Phang Nhga (Phang Nga Bay) on a large tour boat from Phuket or Krabi, or splurge for a private speedboat. Or, you can come to Phang Nga and take a reasonably priced full-day or half-day longboat trip from a pier a few kilometers from the town. There could be as few as 3 people in your group, and even a private boat charter is priced within reason.

As you sail amidst the limestone rocks, your boatman will show you interesting ancient rock painting along the way, something Phuket-based tours will not visit. You will see secluded beaches and tons of mangroves. The star attraction of the tour, sadly, is the extremely overrated so-called James Bond island known locally as Ko Tapu.

This 20-meter tall spike-shaped rock was featured in the 1974 James Bond film “The Man With The Golden Gun”, and never saw the end of tourists flocking to it since. But compared to the truly massive rocks nearby, it is disappointingly small, and as you have to pay the additional 300 baht to embark on the nearby island to see it better, very overpriced. I would call it one of the biggest tourist traps in all of Thailand. You can certainly see it for free from your boat as it approaches the island, and that’s really just about enough.

Fortunately, there is plenty more to see on the tour. For example, a canoe trip underneath the sea caves and through the mangrove forests is well-worth the price. And most boat tours stop at Ko Panyee, a fishing village on stilts adjacent to the karst island. Nowadays, Ko Panyee lives as much by fishing as it does by tourism – restaurants, stalls selling trinkets and a couple of guesthouses, but it’s still well-worth spending an hour wandering its walkways and visiting the local mosque as well as a floating football field.

Unfortunately, if you hope to swim in Ao Phang Nga, you will be disappointed. The water is murky and there is a lot of floating rubbish. Better save your swimming rigor for the sea-facing beaches of Phuket, Phang Nga and Krabi provinces.

Situated within easy walking distance from the central street, Wat Tham Ta Pan is also known as a “Heaven and Hell Temple”. As you explore the grounds, you will see you typical pagodas and a fountain with a wishing well. A little further, you will start seeing something a bit weird: tall statues of distorted and grotesque figures that look like zombies. A little beyond, there is a concrete dragon’s mouth through which you can enter the dragon’s body. After walking in pitch darkness for 30-40 meters (with bats flying over your head), you will exit at the dragon’s tail and find the entrance to the cave full of Buddhist symbolics.

You can explore the cave on your own, just mind the slippery parts. It extends about 200 meters or inside, with a few bridges built over the underwater stream. Your phone’s light will be sufficient to find your way but not quite enough to explore the cave’s ceilings and the multiple shrines and statues.

As you exit the cave, you can descend to a small flat area and encounter the truly macabre spectacle: multiple statues graphically depicting various scenes of hell, mostly tortures of the sinners. You will probably notice than the tormentors are mostly tall, dark-skinned and round-eyed. If you visit in the evening, around 6, the noise of the cicadas will make the scene truly eerie, especially if you are alone.

This handsome cave is located about a mile south of central Phang Nga. You will need a guide to visit as it involves a boat and a raft ride, as the cave has a small river inside. The last part of the tour is walking in knee-deep water for about 15 minutes, so I recommend wearing waterproof sandals for it if you are uncomfortable with sharp pebbles under your feet.

There are a few stalactites, and the ceiling is quite high. Overall, and I say that as someone who has visited many caves around the world, it is worth the money, even though you are not allowed to photograph inside.

As a cave, Sum is not that spectacular: it is rather short and doesn’t have too many interesting features, although if you’ve never been to a cave it’s perfect for you. Just 50 meters or so long, it does have a couple of stalactites and bats.

It is the entrance to the cave that makes this location worth a walk or a quick drive from central Phang Nga. It is covered in rock paintings somewhat reminiscent of frescoes of Sigiriya in Sri Lanka, albeit with different colours and with more motifs. There are male and female figures, depictions of flowers and birds, and some weaponry. These paintings are also not exactly ancient – they are dated to be 100-120 years old, but I was not able to find out who and why painted them.

There are numerous other temples in Phang Nga and around, including a Chinese pagoda right in the town centre, where I witnessed a very intense and noisy celebration of the local goddess’s birthday involving firecrackers and rather painful-looking cheek piercing by some of the devotees. Then there is Wat Suwan Khuha with a reclining Buddha, Wat Rat Upatham with another huge statue of Buddha and a tall chedi, and a few others. There is also a wildlife rescue centre that hosts several rare birds and mammals of the surrounded jungle, but as they look quite miserable in the captive conditions, I wouldn’t recommend it.

All in all, Phang Nga makes a great 2-3 day getaway from Phuket, Krabi, or even Bangkok.