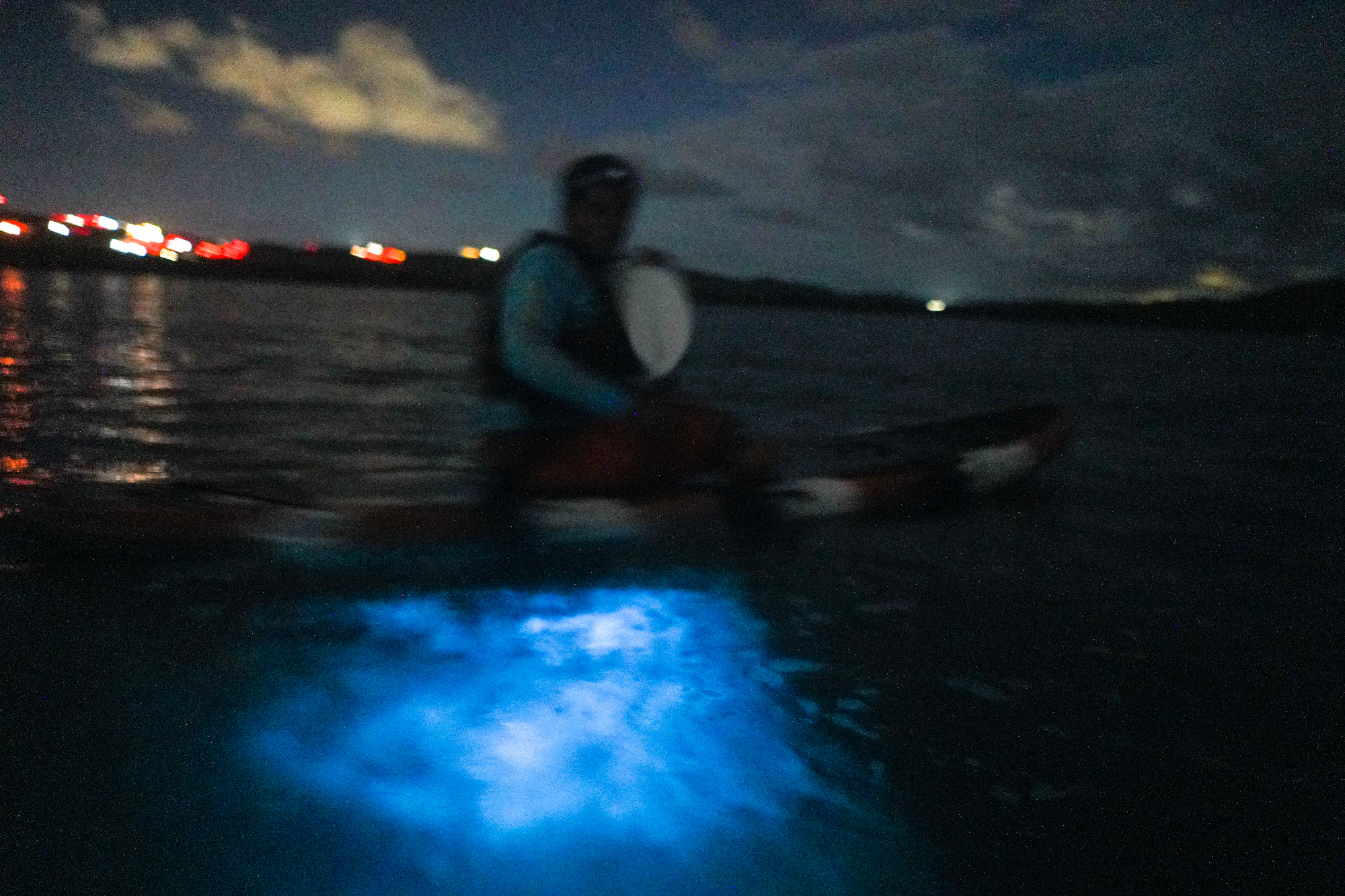 To the east of Puerto Rico lays the small island of Vieques, and in the south of Vieques there is a brackish lagoon called Mosquito Bay, which is the site of the world’s brightest bioluminescence.

I visited Puerto Rico as a transit point between Dominican Republic and the US, and I prepared very little for my week-long stay there. I knew I wanted to visit San Juan, maybe a few beaches and tropical jungles, and that’s about it. So when somebody mentioned to me about bioluminescence which I had never seen before, I was all over it.

Getting to Vieques isn’t particularly hard – a ferry from mainland Puerto Rico takes about 45 minutes. The island is rural and full of semi-feral horses, which is pretty cool in its own right. There are a few nice beaches and coastside hotels and restaurants.

But the star attraction of the island is Mosquito Bay. About a dozen outfitters offer clear-bottom kayak tours of the lagoon, starting after the sundown. I figured, I’d take the tour, put the brightest aperture lens I have on my camera, take a few pictures and leave the island the next day.

Things turned out to be a little bit different, however. There is a reason you rarely see good photographs of bioluminescence unless it’s the type that glows at the waterline in places like Maldives. In Mosquito Bay, you see the glow in the middle of the water, which means you have to be in the boat or kayak. Needless to say, the plankton only glows when you disturb the water with your hand or your paddle. But boy, does it glow bright! Sliding underneath your clear plastic kayak are tens of thousands of sparkles, reminiscent of the brightest and clearest starry night you’d ever see. Truly and unforgettable sight!

Photographing it proved a lot harder than just looking at it. Being in the kayak, you can’t exactly mount tripod anywhere. It is nearly completely dark. I bumped up my ISO to 6400 and opened the lens wide to f-stop 1.4. However, since I was on my own in my kayak, I had to do two things at once: disturb the water with one hand and try to take pictures with the other. The task proved to be futile – as soon as you stop moving the water around, the glowing stops. You are also concerned about not splashing too much water on your camera as you try to induce the glowing. By the time I figured out I should have asked the guides or other tourists in the group to disturb the water for me, the tour was coming to an end.

After the tour, I examined the photos taken and realized that almost none turned out half-good. I had to stay another day and try again. Photos aside, this was one of the coolest natural experiences I’ve ever had, well worth the $60 price.

And thus the next evening, I booked another tour and came a little bit better prepared. I asked the guide beforehand to help me out with the photos for a minute or two by vigorously moving the paddles in the water creating a good amount of luminescence. I went up to ISO 12800 on my camera, and positioned my kayak at the right distance from the guide to allow for enough frame space with my 35mm lens.

And even though the few pictures that did turn out okay did little justice to the mesmerizing spectacle of these myriads of tiny stars in the water, it nevertheless gives an idea of what the whole experience actually is. The blue colour is slightly enhanced by the camera and post-processing; in reality it’s a bit more white, almost like glowing champagne bubbles in the pitch dark water. I hope I can come back and see it once again.